SHRINE of LA VIRGEN DE LA SOLEDAD DE PORTA VAGA is one of the Jubilee Churches of the Diocese of Imus. 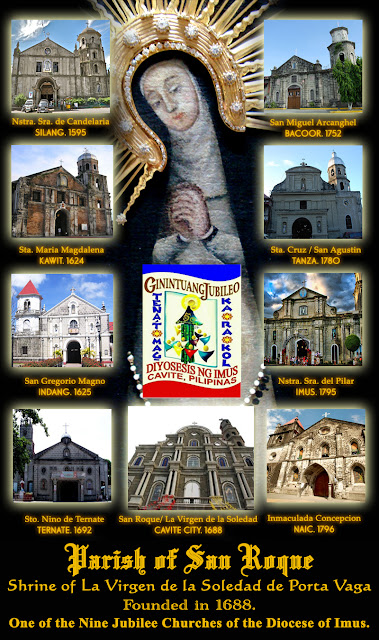 The Diocese of Imus opened its Jubilee Year last Nov. 24-25, marking the declaration of the whole province of Cavite as an independent diocese from its mother diocese, the Archdiocese of Manila, on Nov. 25, l96l by Pope John XXIII, by virtue of the Apostolic Constitution “Christi Fidelium.” The diocese was canonically erected on April 26, 1962 with the Most. Rev. Artemio G. Casas as its first bishop. The parish church of Ntra. Sra del Pilar in Imus was chosen as the cathedral church, the seat of the new diocese.
As part of the Jubilee celebration, the Diocese has chosen nine (9) Jubilee churches where the faithful can go on pilgrimage to receive an indulgence as part of the celebration.  In Catholic theology, an indulgence is the full or partial remission of temporal punishment due for sins which have already been forgiven. The indulgence is granted by the Catholic Church after the sinner has confessed and received absolution. The belief is that indulgences draw on the Treasury of Merit accumulated by Christ's superabundantly meritorious sacrifice on the cross and the virtues and penances of the saints. They are granted for specific good works and prayers.
The churches chosen were: (1) Parish of Nuestra Senora de Candelaria in Silang, founded in 1595, (2) Parish of St. Mary Magdalene in Kawit, founded in 1624, (3) Parish of San Gregorio Magno in Indang, founded in 1625, (4) Parish of San Roque, Shrine of Nuestra Senora de la Soledad de Porta Vaga in Cavite city, founded in 1688, (5) Parish of Sto. Nino in Ternate, founded in 1692, (6) Parish of St. Michael the Archangel in Bacoor, founded in 1752, (7) Parish of the Holy Cross, Shrine of St. Augustine in Tanza, founded in 1780, (8) Parish and Cathedral of Our Lady of the Pillar in Imus, founded in 1795, and (9) Parish and Diocesan Shrine of the Immaculate Conception, in Naic founded in 1796.  We enjoin everyone to make this pilgrimage of faith most especially this coming lenten season.
Posted by COFRADIA DE LA VIRGEN DE LA SOLEDAD DE PORTA VAGA at 7:48 AM No comments: Links to this post 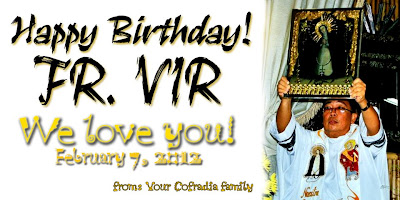 MARY, QUEEN OF OUR HEARTS:Keeping the faith, sharing the devotion, spreading the love.

Come and join us in our devotion.
PLEASE HELP SPREAD THE WORD.
Please share this link in your own wall to inform all devotees.
Everything that you need to know about the VIRGEN DE LA SOLEDAD is here in this site.
THANKS.

MARY, QUEEN OF OUR HEARTS:Keeping the faith, sharing the devotion, spreading the love.
Posted by COFRADIA DE LA VIRGEN DE LA SOLEDAD DE PORTA VAGA at 7:40 AM No comments: Links to this post

COFRADIA DE LA VIRGEN DE LA SOLEDAD DE PORTA VAGA
Cavite city, Region IV, Philippines
The COFRADIA DE LA VIRGEN DE LA SOLEDAD DE PORTA VAGA has been established in the year 1998 through the dynamic leadership of REV. FR. VIRGILIO SAENZ MENDOZA and the late + ANTONIO G. NAZARENO of Cavite City. Today it is supported by its hundreds of members working together for the strengthening of the devotion to the Virgen de la Soledad, the Queen and Patroness of the Province of Cavite. The Cofradia is presently led by its newly elected President, Bro. Jonnell Ryan I. Enriquez and Spritual Director, REV. FR. VIRGILIO SAENZ MENDOZA.They are supported by the other seven newly elected officers and past officers who work hard to keep the devotion alive not only in Cavite but in all parts of the globe.