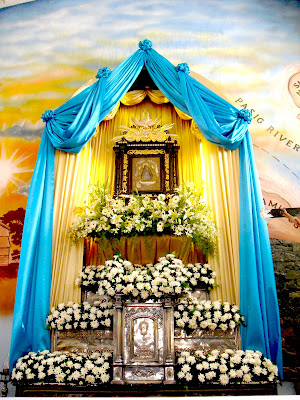 Venerated in a little chapel a few meters away from CM Recto Ave. in Manila, is another version of the Virgen de la Soledad.  Though not much is known of the icon, many believe that it is one of the many representations of the famous and miraculous Virgin of Porta Vaga in Cavite and that this replica may have been honored in this community since 1884.  According to accounts and stories of old people, the Camba area has been inhabited by mostly residents from Cavite city that’s why it has been called in the older days as Barrio Soledad.

Miracles have also been attributed to this mysterious icon.  It is said that the entire neighborhood where it resides has always been protected from the fires which guttered the Binondo district many times.  The Camba area has always been spared from other kinds of calamities and even the ravages of wars.

Her feastday is celebrated annually every 1st of January through a translacion going to the Mother Parish of Sto. Niño de Tondo capped by a festive caracol procession going back to its home in Camba St., Manila. 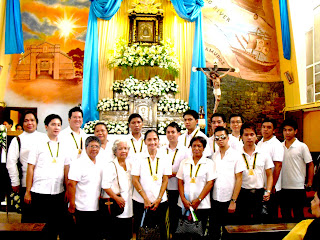 COFRADIA DE LA VIRGEN DE LA SOLEDAD DE PORTA VAGA
Cavite city, Region IV, Philippines
The COFRADIA DE LA VIRGEN DE LA SOLEDAD DE PORTA VAGA has been established in the year 1998 through the dynamic leadership of REV. FR. VIRGILIO SAENZ MENDOZA and the late + ANTONIO G. NAZARENO of Cavite City. Today it is supported by its hundreds of members working together for the strengthening of the devotion to the Virgen de la Soledad, the Queen and Patroness of the Province of Cavite. The Cofradia is presently led by its newly elected President, Bro. Jonnell Ryan I. Enriquez and Spritual Director, REV. FR. VIRGILIO SAENZ MENDOZA.They are supported by the other seven newly elected officers and past officers who work hard to keep the devotion alive not only in Cavite but in all parts of the globe.